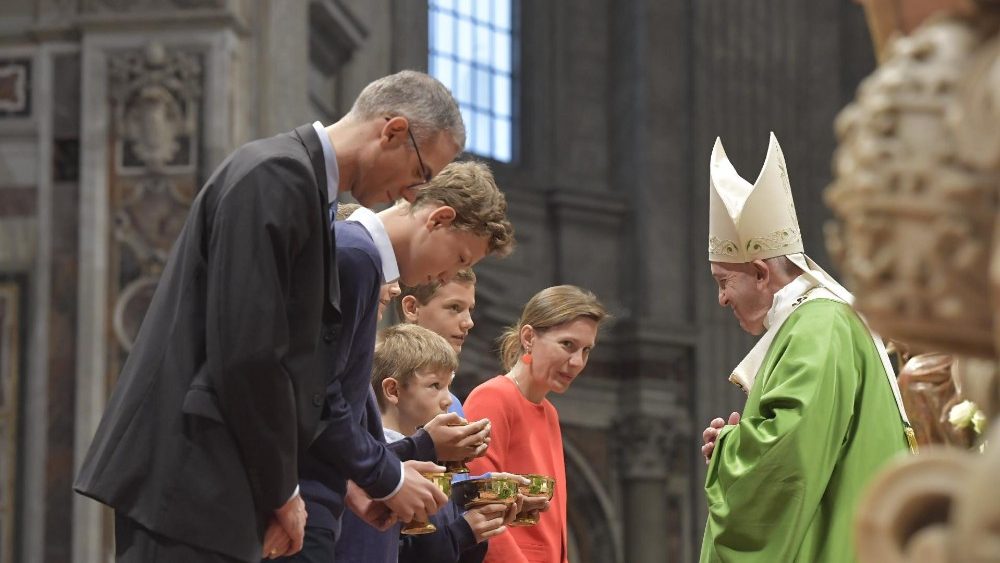 Pope on World Mission Day: ‘Go and Make Disciples of All Nations’

In the interview, he discusses how each year, the Catholic Church celebrates Missionary Month in October, but this year, Francis called for it to be an “extraordinary one,” which is welcoming various events to commemorate it, including the Mass Pope Francis celebrated yesterday morning, on World Mission Sunday, in St. Peter’s Basilica.

The Italian prelate also underscores how it is necessary to rediscover love and affection for one’s faith, and how people around the world can partake in this month’s events. Moreover, he underscores, “If there is no love for one’s faith, everything stops!”

Here is our interview:

Cardinal Filoni: First of all, there is the ordinariness of the fact that every year, the month of October is Missionary Month. The ‘extraordinary’ nature of the one of October 2019 is due to the fact that we wish to focus our reflection on a specific point, in a special way: the awareness that as Baptized–enjoying and living the very reality of Baptism, that is to say, grace–, we also become ‘sent.’

It means we cannot be selfish, we cannot shut ourselves up [be quiet and silent]! We want to make people reflect on this because we want to get out of the mentality that has always considered mission as something to be delegated to others, to people “who are a bit more generous,” to people “who have a special vocation,” to people who like to set off” and go into distant, different countries, and so on.

ZENIT: And instead how should mission be conceived?

Cardinal Filoni: We want to show that perhaps this missionary idea, once did require a special vocation, but that today, everyone travels! Everyone moves for reasons of pleasure, vacation… or work or business… or to learn about and meet different cultures. It almost therefore seems that faith remains almost extraneous to all this great human mobility, when instead it should be in the first place! We are not allowed to not think about the role and the mission that we all have to bear witness to the faith. We must bring faith to others.

ZENIT: And how can we witness faith?

Cardinal Filoni: Pope Francis tells us this very clearly: we need to witness what we believe and what we love, which is part of our life, and at the same time, to announce it. This is what Saint Peter said (1 Pt 3:15): “to explain the hope you have in you.” And therefore, this is the announcement. Having this awareness takes us out of that idea of delegating mission to others, to take it instead as our mission, as an integral, essential part of our moral, spiritual life, our life of faith.

ZENIT: And people around the world, how can they take part in this month from their homes?

Cardinal Filoni: Let us first say: we can take part in many ways. An elderly or sick person can bring the contribution of the reality they live. I think of the chain of prayer, the Living Rosary conceived by the Venerable Pauline Jaricot [the founder of the Pontifical Society for the Propagation of the Faith] in France, almost 200 years old, to pray for missions. At that time traveling, crossing oceans was a difficult experience, if not almost impossible for many people. But Jaricot said that we too can participate in the mission of the Church with this prayer, which unites us, in presenting our own prayer to God.

ZENIT: Is prayer the only way to participate in the Extraordinary Missionary Month?

Cardinal Filoni: Even Pauline Jaricot, at that time, said: is prayer not enough? Then we have those writing off on their tax returns, “here, this is the contribution I make for the needs of the missions.” But in addition to all this, we must be protagonists of the mission and not only delegate the mission to others. It is necessary to rediscover affection and love for one’s faith. And this can be done in many ways.

ZENIT: What do you mean by love for one’s faith?

Cardinal Filoni: If there is no love for one’s faith, everything stops! But when I love my faith, then I become creative. Creativity is needed for mission, even with regard to the tools, the meetings, the vision ..Mission is no longer directed only to distant countries, but it is something that takes place between us. And it’s nice that so many people who have arrived in these last decades for example, in Italy, when they received the tool to learn and live a living faith, if you will, then they themselves asked for Baptism.

ZENIT: Do you know anyone of them? Do you think of anyone in particular?

Cardinal Filoni: Recently, I met a young man from Morocco. When we introduced ourselves, he told me a Muslim name and a Christian name. Then he added: “I am a Christian.” “Oh yes? And what made you decide to become a Christian?,” I asked him. He replied: “[It was] thanks to the testimony I was given here, the way I was received.”