Pope at Vespers: The Lord is calling you to bear witness

Home Posts Pope at Vespers: The Lord is calling you to bear witness 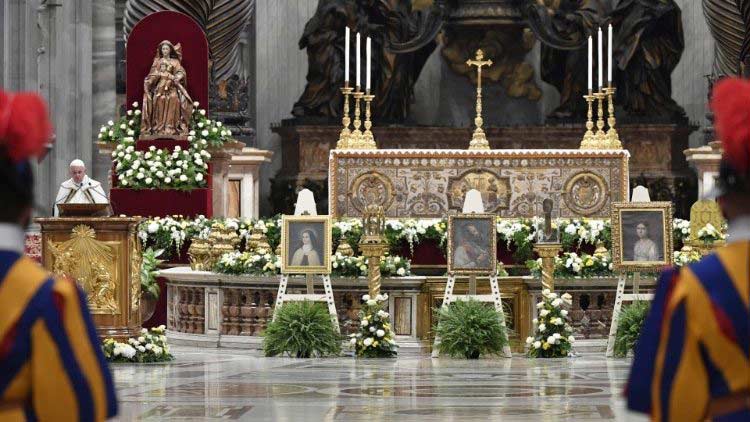 Pope Francis presides over the celebration of Vespers in Saint Peter’s Basilica to open the Extraordinary Missionary Month of October. In his homily, he urges us to be witnesses in a missionary Church that is always “on the go”.

1 October is the feast day of Saint Therese of the Child Jesus, affectionately known as “The Little Flower”. Although she never left her Carmelite cloister, she is the universal patron of missions, along with Saint Francis Xavier.

Three missionary models
Pope Francis recalled both of them in his homily. Saint Therese, he said, “made prayer the fuel for missionary activity in the world”. Saint Francis Xavier, said the Pope, is perhaps “the greatest missionary of all time, after Saint Paul”.

Together with the Venerable Pauline Jaricot, a French laywoman who helped create the foundations of the Pontifical Missionary Societies, they “give us a jolt”, said the Pope. They challenge us to “emerge from our shell and to renounce our comforts for the sake of the Gospel”.

Using our talents
Pope Francis began by reflecting on Saint Matthew’s Gospel that recounts the parable of the talents. “God has entrusted us with his greatest treasures: our own lives and the lives of others”, he said. God calls us “to make our talents bear fruit, with boldness and creativity”.

This extraordinary Missionary Month, said the Pope, “should jolt us and motivate us to be active in doing good. Not to be notaries of faith and guardians of grace, but missionaries”.

Being a witness
Being a missionary, said Pope Francis, means “living as witnesses”. Witness, in fact, “is the key word: a word with the same root as the word ‘martyr’”. “Martyrs live by spreading peace and joy, by loving everyone, even their enemies, out of love for Jesus”, continued the Pope. “Let us ask ourselves this month: how good a witness am I?”

Mission not omission
Returning to the parable, the Pope noted how Jesus describes the fearful servant as “wicked and lazy”. He was wicked, said Pope Francis, for not doing good: “he sinned by omission”. “To live by omission is to deny our vocation: omission is the opposite of mission”.

A Church on the go
If the Church “is not on the go, it is not Church”, stated Pope Francis. A Church on the go is a missionary Church “that does not waste time lamenting things that go wrong… a Church that does not seek safe oases to dwell in peace, but longs to be salt of the earth and a leaven in the world”.

We are all missionaries
Today we begin the Missionary Month of October, said the Pope, “accompanied by a religious woman, a priest and a lay woman. They remind us that no one is excluded from the Church’s mission”.

The Lord is calling you
In this month, said Pope Francis, “the Lord is also calling you”, fathers and mothers of families, young people. “You, who work in a factory, a store, a bank or a restaurant; you who are unemployed; you are in a hospital bed… The Lord is asking you to be a gift wherever you are, and just as you are, with everyone around you”.

The Lord is asking you “not simply to go through life, but to give life”, said the Pope, “not to complain about life, but to share in the tears of all who suffer”.

“The Lord will not leave you alone in bearing witness”, concluded Pope Francis. “You will discover that the Holy Spirit has gone before you and prepared the way for you. Courage!”